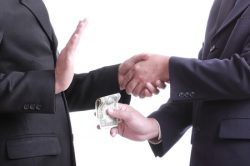 Be weary of payments that you make or receive in exchange for business advantages for yourself or your employer. Article 322 octies could renders a banker guilty of active private corruption if he/she pays a commission to a lawyer for introducing a client.

Since the 1st July 2016, you can be held guilty of private corruption if you offer an advantage to a third party for doing or not doing something which he or she should be doing and which is in breach of his/her legal contractual or professional duties and which depends on his/her discretion. It is enough to promise the “undue” advantage. Even if this undue advantage is finally not given, the offence of private corruption can still be admitted.

Both the giver of the undue advantage and the receiver are guilty of private corruption without the offence being subject to a criminal complaint. The sanction can be of upto 3 years of prison. In Switzerland, the first criminal offence is always subject to a “suspended sentence”. This means the person is not imprisoned but gets a criminal record and the second offence ends the suspension of the first offence.

A person based outside of Switzerland can be held guilty as the giver or the receiver if the offence has a legal connection with Switzerland.

The contents of the new articles of the Swiss Penal Code could allow the Swiss authorities to consider a private banker guilty of active private corruption (art. 322 octies CPS) for paying a retrocession to a lawyer for recommending a client to the bank.

Similarly, the lawyer could be considered guilty of passive private corruption (art. 322 novies CPS). Before this legislative amendment, this practice was only prohibited by the ethical rules of the legal profession.

All service providers should have an internal policy spelling out the rules of private corruption for their employees and if possible provide them with an in-house training on these rules.